skip to main | skip to sidebar


Following on from the huge success of Skylanders Spyro's Adventure comes Skylanders Giants, with a mix of new characters and familiar faces from the original game.

The eight elements; Magic, Water, Tech, Fire, Earth, Life, Air and Undead remain, except there are now six characters per element as opposed to four from the original game.  These are made up of:-

Three Reposed/Series 2 characters per element.  24 favourites from Skylanders Spyro’s Adventure return reposed in an all new way in Skylanders Giants!  Each Series 2 Skylander features an all new "Wow Pow" upgrade power, as well as the choice of more than one upgrade path!


Posted by takethegame.co.uk at 21:01 No comments:

Skylanders Spyro's Adventures was one of the most popular Christmas 2011 releases,with the character figurines highly-sought after, especially due to their staggered release dates and scarce availability.

The starter pack of the game included the game itself, the portal of power accessory and three initial character figurines.  The fundamental game takes the form of a Pokemon style adventure, where each of the characters are grouped into one of eight elements; Magic, Water, Tech, Fire, Earth, Life, Air and Undead. 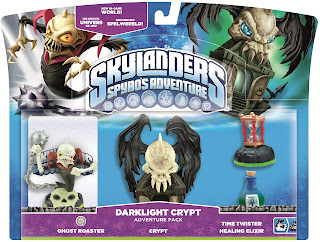 When the character figurines are placed on the "Portal of Power" peripheral, they appear in the game to do battle and carry out tasks specific to their character element type, learning and becoming more powerful all the time, remembering their moves and level, even when used on a different console/portal/system.

Check out our selection of items for the Nintendo Wii and Wii U, with great prices, free UK delivery and same day despatch in most cases! The list will change from time to time as new games and accessories for the Wii/Wii U arrive.

Nintendo Wii and Wii U items from Take The Game with Free UK Delivery
Posted by takethegame.co.uk at 21:33 No comments:

Posted by takethegame.co.uk at 22:14 No comments:

We started out selling video games, hardware and accessories and have slowly diversified over the years.  All items are new, genuine UK versions. We don't sell imports, copies, fakes, or used items!

All prices include free UK delivery, and items are normally despatched the same working day where the order/payment is received before 2pm. Payment is accepted by all the major credit/debit cards or by Postal Order/Bank Transfer (items despatched on release of payment).

There is also the option of subscribing to our newsletter, and you can also write reviews about the items we sell, to let others know your opinions to help them make the right buying choices.

All items are brand new and genuine UK format versions

Discover more about Take The Game video games and accessories...